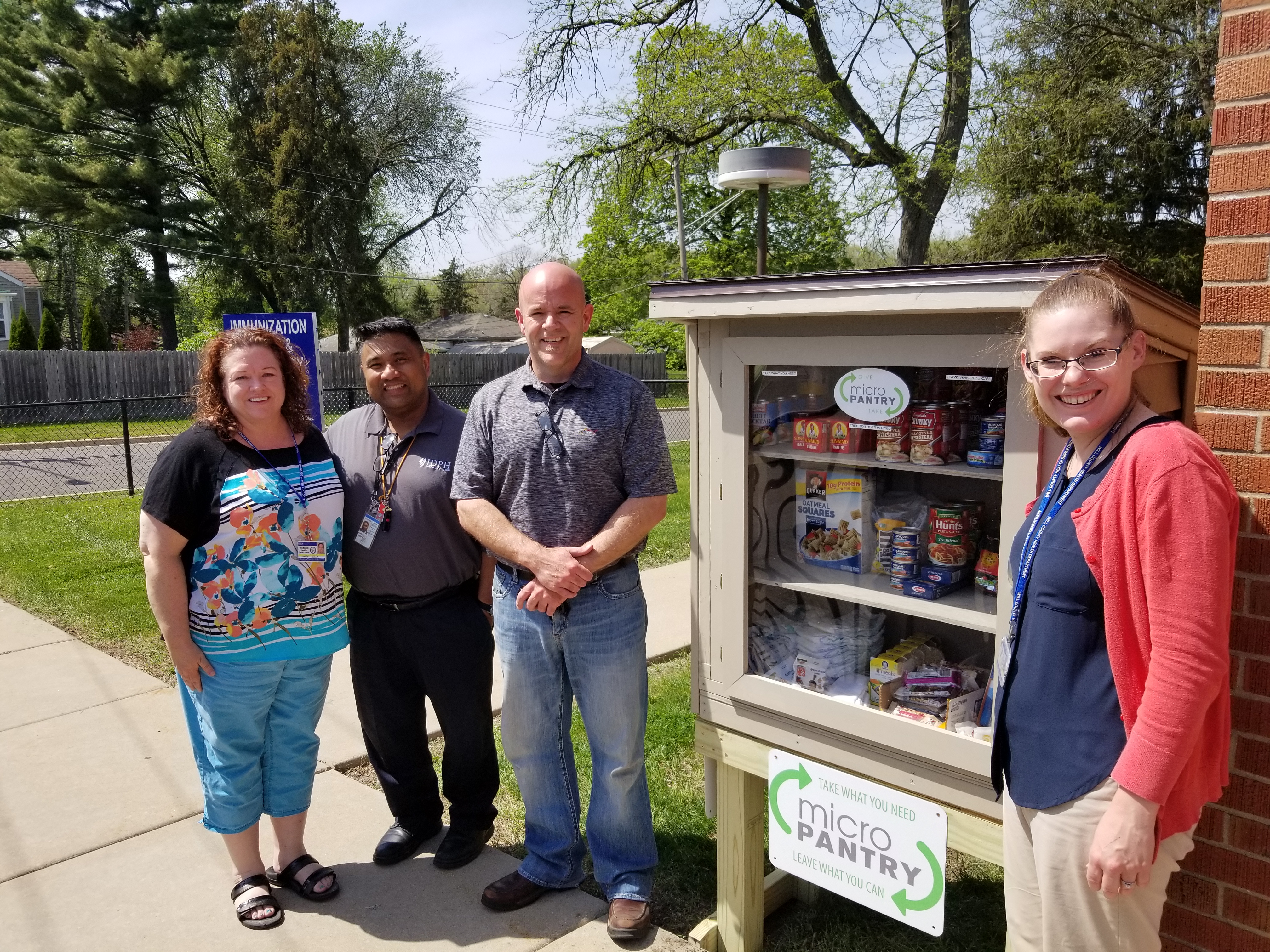 There are now 18 micro pantries, most of them in the Will County or southwest suburban region. The Will County Health Department at 501 Ella Avenue in Joliet (parking lot is off Neal Avenue) is the home of the latest micro pantry, designed to allow anonymous food pick-up for those in need, and a drop-off point for those who wish to help.

Any resident is welcome to stop by the approximately four-by-three feet (two feet deep) wooden box, with a protective door and three shelves. They will find non-perishable foods, and other common necessities such as diapers for babies. The sign on both the front and side says, “Take what you need, leave what you can.”

This whole initiative began back in December of 2016, behind the leadership of Jeff Eberhard from E-Z Auto Sales at 313 South Larkin in Joliet. “We had been involved with assembling and passing out ‘homeless backpacks’ full of food for quite a while,” Eberhard recalled. “Word of mouth got things going, and we were working with organizations, such as veterans support groups. But then we realized a lot of people were missing out on these backpacks, especially single moms with kids. They might have been afraid of being seen, and then reported to someone or hurt by someone they were hiding from. Or often it was the simple case of ‘being too proud to ask for help.’”

So the micro pantries were born, and just recently a non-for-profit group Eberhard organized to hopefully expand them even further, The Guardian Group, was officially approved. Was this a brand new idea? No, but it was a major improvement. Eberhard says similar efforts around the country have been called by various names, such as a “blessing box.”

“From what we noticed,” Eberhard explained, “the biggest problem was a lack of oversite and organization. It was a matter of putting up a box and getting someone to adopt it, take ownership of it, and go out every day and make sure it’s okay. And if there’s too much food donated at one time, have an extra room where you can store it.

“At every location we’ve placed a micro pantry they have taken charge, not to mention area residents who seem to adopt it as their own and help keep it stocked. A great example is the one we have at Rockdale Elementary School. The Rockdale Lions Club took over and made it a top priority. They keep it stocked with cereal, snacks, and much more. Many families at that school often pick up their kids, and then pick up their dinner at the micro pantry at the same time.”

For Cindy Jackson, a Will County Health Department Manager who is heavily involved with the MAPP (Mobilizing for Action Through Planning and Partnerships) Collaborative’s Food Access workgroup, which includes many local partner organizations, the Health Department’s new micro pantry is part of a much larger mission.

“This micro pantry is open to everyone,” Jackson said. “But it’s especially important here in the 60433 zip code. After Certified Warehouse Foods closed, this area became what is known as a ‘food desert.’ The MAPP Food Access Group has been focusing on communities with a high rate of food insecurity with things such as these micro pantries, mobile pantries from Northern Illinois Food Bank, and efforts to bring in new grocery stores. There are also plans for the hospitals to begin to assess patient needs with a survey asking about food access.

Jackson added that within two hours of the Health Department micro pantry’s opening, (around 3 PM Tuesday May 8th), a lot of food was already claimed. So donations to replenish it were needed right from the start. Anyone is welcome to help. Health Department Executive Director Sue Olenek says all WCHD employees may get involved on their own.

Other micro pantries in the area can be found at locations such as D’arcy Hyundai on West Jefferson, the Big Brothers -Big Sisters building on Taylor Street in Joliet, and Sage Plaza on MacGregor in Lockport. For a full list, go to the Micro Pantries Facebook page.

Is Eberhard ready for more requests for the installation of micro pantries? “Let me put it this way,” Eberhard said with a smile, “we don’t say no very often.” Jeff Eberhard can be reached at E-Z Auto Sales at 815-744-1821.