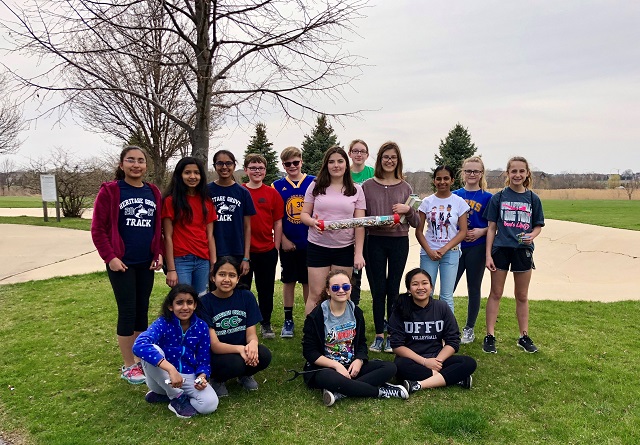 The Plainfield Park District Board recently voted to make all of their park facilities completely tobacco-free. And as Community Health Educators Amrita Raghuraman and Shree Woods from the Will County Health Department pointed out, students from Plainfield District 202’s Heritage Grove Middle School deserve much of the credit.

Through the “Reality Illinois” grant from the Illinois Department of Public Health, Raghuraman and Woods were able to recruit students to help educate the park board on this initiative. The efforts began in December of 2017. And although it was just one week from the start of winter break, the students were quite interested.

“Their principal was one of the first to respond to our mass e-mail to the school district. We spoke to every 6th, 7th, and 8th grader in their social studies classes,” Woods recalled. “That’s around 900 students.”

“Our average attendance at each meeting was about 40 students,” said Raghuraman. “Those that became really passionate about this case presented before the park board. They covered everything from the benefits of tobacco free parks to the dangers of second hand smoke. The board was quite impressed by the students’ interest.”

The policy passed by the Plainfield Park District Board is the second of its kind in Will County. “Other park districts; such as Wilmington, Braidwood, and Peotone; have passed tobacco-free policies that still allow specific smoking zones,” Woods explained. “But Plainfield, and the Frankfort Park District in 2014, have both passed the strongest policy possible, and that’s what the students worked for. It’s a ban on all tobacco use throughout the park properties, including a ban on e-cigarettes.”

So now, with signage going up soon in over 90 Plainfield Park District properties, the question is: What Will County park district should be next targeted for making a change? Wherever it is, it will be hard to have as big an impact as the Plainfield Park District. As the 9th largest park district in the State of Illinois, Plainfield’s parks serve over 105,000 residents and cover just over 43 square miles.

The Plainfield Park District serves both Will and Kendall Counties, and includes park space and facilities in seven communities; including Plainfield and Wheatland Townships, Bolingbrook, Crest Hill, Joliet, Plainfield, and Romeoville. The District is an Illinois Distinguished Accredited Agency for excellence in delivering parks and recreation services. The district has over 90 parks and 63 playgrounds. More information is available at https://www.plfdparks.org/.

REALITY Illinois is an anti-tobacco campaign developed by Illinois teens and funded by the Illinois Department of Public Health (IDPH) as part of the Illinois Tobacco-Free Communities Program. Through this program, Will County students are able to participate in civic engagement projects, called Engaging Youth for Positive Change. EYPC is an evidence-based transformative program that empowers young people to work with local governing bodies to adopt policies that create healthier communities.

Through EYPC, participating youth gain important research, analytical and critical thinking, communication, teamwork skills, and most importantly, valuable real-world experience. Youth receive the opportunity to work on real social and community change projects such as smoke-free public spaces. The Will County Tobacco Control and Prevention Program has coordinated very successful EYPC/Reality IL groups across Will County since 2005 in Joliet, Wilmington, Braidwood, Peotone, and Plainfield; culminating in public health policies being developed by students, and implemented in their communities.

If you are interested in learning more about tobacco-free outdoor spaces, or need help with developing a tobacco-free policy, please visit www.willcountyhealth.org or call the Will County Tobacco Control and Prevention Program at (815)-727-8769.