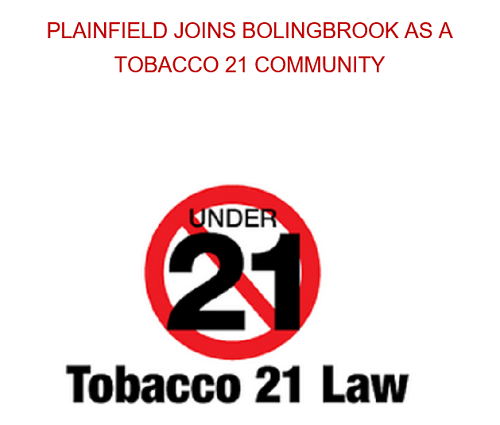 With a 5-1 vote on March 4th, the Plainfield Village Board passed a Tobacco 21 ordinance, following suit with the ever-growing trend in the State of Illinois.  This means that no one under the age of 21 will be able to purchase cigarettes, e-cigarettes, or any other tobacco product within the Village of Plainfield.

Although traditional forms of tobacco use, such as cigarettes, have seen a decline, the rate of e-cigarette use among youth has reached an epidemic level, more than doubling almost every year. With newer products coming out disguising the e-cigarettes to look like USB drives, underage youth have a much easier time hiding them from their parents and teachers. The Plainfield Village Board prior to March 4th’s 5-1 vote in favor of the “Tobacco 21” ordinance.

Additionally, it’s more likely that a 16-year-old would have a friend who is 18 than 21 to buy tobacco products for them, and that’s why the Tobacco 21 initiative is so important. Data shows that if you can keep tobacco products out of the hands of youth before the age of 21, the likelihood of them ever trying tobacco and tobacco products drops to less than 10%

It was in October of 2014 that Evanston became the first Illinois city to pass Tobacco 21.  Today, 35 Illinois municipalities, including unincorporated Lake and Cook Counties and the City of Chicago, have passed Tobacco 21.  But with Bolingbrook and Plainfield being the only two located primarily in Will County to take this action, the Will County Health Department Tobacco Control and Prevention Program believes there is much more work to be done, and urges other municipalities to follow their lead.  The Will County Board of Health passed a resolution of their own in April of 2018 calling for more Will County communities to join in this effort.

With the Plainfield Village Board’s adoption of Tobacco 21, and the additional fact that all Plainfield Park District facilities are also tobacco-free, Plainfield has set the standard for all other towns in Will County, in its continued commitment to decrease youth tobacco and e-cigarette use.

The actual implementation date for the new ordinance in the Village of Plainfield depends upon how quickly stores can be informed and prepared.  For example, new placards will need to arrive from the state specifically stating the new age limits for tobacco purchase.  The Village of Plainfield will issue a press release when the date is confirmed.

Will County’s Community Health Educators are reminding everyone that the Health Department’s Tobacco Control & Prevention Program is available to offer technical assistance to municipalities.  This includes tool kits with resources, sample ordinances, infographics, and other valuable information.