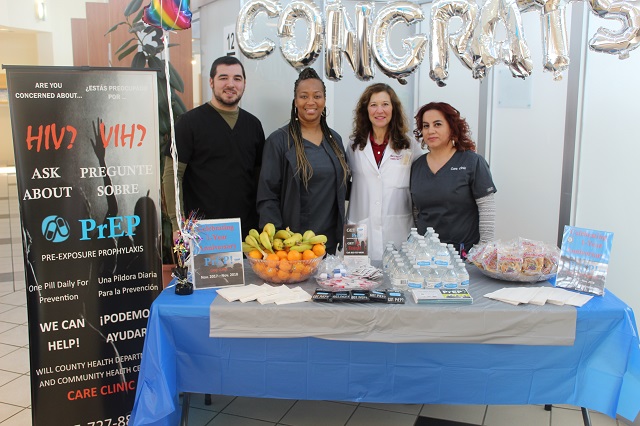 “Together for Love: Stop HIV Stigma”

SPRINGFIELD – National Black HIV/AIDS Awareness Day is celebrated February 7 every year to help end the stigma and mobilize communities to get educated, tested, treated, and involved with their local HIV/AIDS community efforts. This year’s theme, “Together for Love: Stop HIV Stigma,” raises awareness that we all have a role to play in stopping HIV stigma.
Nationally, the black community is the racial/ethnic group most burdened by HIV across all stages of the diseasefrom new infections to death. Education, outreach, testing, and treatment have all helped reduce the number of new HIV infections. According to the Centers for Disease Control and Prevention (CDC), HIV diagnoses have fallen in recent years among black women (25 percent decline from 2010 to 2016) and heterosexual men (26 percent decline). Diagnoses among young black gay and bisexual men (aged 13 to 24) decreased five percent.

Although progress is being made, the work must continue. In 2017, nearly 17,000 black people in the U.S. received a new HIV diagnosis according to the CDC. The black community accounted for 43 percent of all HIV diagnoses in the U.S. despite making up 13 percent of the U.S. population. In Illinois, the black community makes up 14.7 percent of the state’s population, but accounts for half of the roughly 39,000 individuals living with HIV.Last week, Governor JB Pritzker signed an executive order to take action to end the HIV epidemic and reduce health disparities by ensuring the state is investing in agencies, programs, and services that work to end the HIV epidemic. This includes funding for increased HIV testing and prevention, PrEP, the African American HIV/AIDS Response Act, and other public health initiatives.

Pre-exposure prophylaxis (PrEP), a prevention pill and program that is up to 99 percent effective at preventing HIV infection when utilized consistently and correctly, is helping reduce the spread of HIV. Individuals can learn about HIV and PrEP, find and enroll in PrEP clinics, and in the absence of insuranceget PrEP free of charge, by going to www.PrEP4Illinois.com.

The Will County Health Department PrEP Clinic, combined effort of their Community Health Center and Family Health Services divisions, has been in operation since December of 2017.

“During the first year, we saw approximately 30 patients a month during our 11 AM to 4 PM weekly clinics on Thursdays, which works out to more than 360 visits for the entire year,” said Health Department HIV and STD program specialist Kendra Coleman. “Currently, we have 30 active PrEP patients, and they average five to six visits per year. While PrEP is our primary function, we also see patients seeking STD screenings, and treatment as potential PrEP candidates. And while PrEP is for HIV-negative patients, we also link newly diagnosed HIV-positive patients into care, through our HIV Navigation Services.

The WCHD PrEP clinic is now taking appointments up until 4 PM (previously the last appointment was taken at 3:30), with the hours continuing to be 11 AM to 4 PM on Thursdays. The number to call is 815-727-8830.

IDPH has also joined the Chicago Department of Public Health, AIDS Foundation of Chicago, community based-organizations, health care providers, government agencies, people living with HIV, and others on ‘Getting to Zero,’ a plan to end HIV in Illinois. By 2030, the goal is fewer than 100 new HIV cases per year or ‘functional zero’ —a point where the HIV epidemic can no longer sustain itself. You can find more information about ‘Getting to Zero’ on the IDPH website.

Additionally, the IDPH Center for Minority Health Services’ Text2Survive program is a free texting tool that individuals can use to set up and receive personalized medication reminders, to find a site that offers testing and care services, as well as find some PrEP locations around the state by texting 36363.

More information about HIV/AIDS, including the AIDS Drug Assistance Program, can be found on the IDPH website or call 800-243-2437 to find the nearest HIV testing location.
–