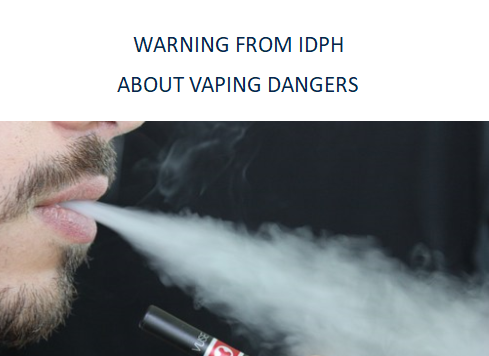 SPRINGFIELD – The Illinois Department of Public Health (IDPH) is working with local health departments to investigate the hospitalization of three young people who experienced severe breathing problems after vaping.  Today, the Wisconsin Department of Health Services reported 11 confirmed and seven suspected cases of severe pulmonary disease among adolescents, some of whom had to be intubated, who reported vaping.  These identified individuals experienced respiratory symptoms including cough, shortness of breath, and fatigue.  Symptoms worsened over a period of days or weeks before admission to the hospital.

“Vaping among teens has increased dramatically over the last several years,” said IDPH Director Dr. Ngozi Ezike.  “While the short- and long-term effects of vaping are still being researched, these recent hospitalizations heighten the need for parents talk with their teens about vaping and for both to understand the consequences and potential dangers of vaping.”

According to the American Association of Poison Control Centers, as of July 31, 2019, poison control centers have managed 2,439 exposure cases about e-cigarette devices and liquid nicotine in 2019.

The names and types of vaping products, as well as where they were obtained, are still being investigated.  The three reported individuals in Illinois reside in the northeastern part of the state.  In order protect the identity of the affected individuals, additional information is not available.  IDPH will continue to work with local health departments, as well as the Wisconsin Department of Health Services, to identify the cause of these severe illnesses.

People who experience any type of chest pain or difficulty breathing after vaping in the weeks or months prior to these symptoms should seek immediate medical attention.  Health care providers caring for patients with unexpected serious respiratory illness should ask about a history of recent vaping.