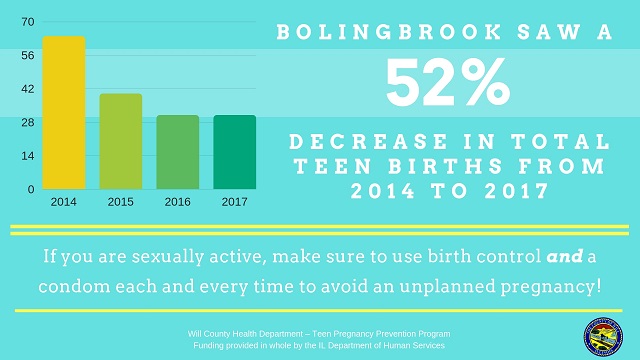 When teen births decreased by 52% in Bolingbrook from 2014-2017, it was certainly noticed and celebrated by the community.  And it appears that a team effort by the Bolingbrook Alliance for Teen Pregnancy Prevention (BATPP), following a grant awarded to the Will County Health Department (WCHD), may have contributed to this good news.

The BATPP was established through the Illinois Department of Human Services (IDHS) Teen Pregnancy Prevention Grant. Funding for this state grant was awarded to communities with high rates of teen births and sexually transmitted diseases (STDs) among African American and Hispanic populations. It turned out that Bolingbrook was identified by IDHS to have higher than average rates of teen births, chlamydia, and gonorrhea. For example, statistics showed that in 2014, there were 64 teen births in the Village of Bolingbrook. In 2016, as a response to those numbers, the Health Department was awarded the grant, in collaboration with the Valley View School District (VVSD).  This grant has enabled WCHD community health educators to teach the evidence-based teen pregnancy prevention curricula in the Valley View School District’s Bolingbrook middle schools and high school. This evidence-based initiative specifically focuses on reducing the rate of teen pregnancy, HIV, and other sexually transmitted infections, as well as risky sexual behaviors among adolescents.

But while the WCHD educators were teaching the curricula to the students, and receiving much praise for, as one student reportedly stated, “keeping it 100” (keeping it real) for the students, an effort was required by the grant to simultaneously educate parents and the community about methods to fight teen pregnancy and STDs, and to reduce those rates through education and positive youth development.  Hence, The Bolingbrook Alliance for Teen Pregnancy Prevention took off in September of 2016. Service providers from youth-serving organizations, community stakeholders, VVSD staff, parents, and community members and health educators were all invited to join.

WCHD Health Educator Kathleen Harkins says the BATPP’s efforts have been a perfect complement to enhance what health educators are teaching the students.  “A supportive and positive community is an important protective factor against teen pregnancy.  When teens know that the community cares about them and their futures, this can encourage teens to make better choices.”

The BATPP has contributed to numerous health education initiatives since its inception. The BATPP immediately recognized the key role parents have in helping their teens navigate the adolescent years; following the premise that good communication with teens makes them less likely to participate in risky behavior.

Selina Jones, a VVSD employee, became involved as a parent through the creation of the Junior STARS Club.  (STARS stands for Strong Thriving Abundance of Radiant girls who Shine).  This allows teen girls to attend special meetings on pregnancy and sexually transmitted disease (STD) issues with their parents.  Jones says seeing the reactions on the faces of both the students and parents shows immense progress.

“So many students are simply not aware of a lot of things, and then parents are nervous to talk to their kids about things health and wellness wise.  But these meetings are organized very well by David Campbell and Kathleen Harkins from the Health Department and parents are just so glad they feel able to discuss these issues.”

The BATPP also identified the lack of places in Bolingbrook for teens to go if they were sexually active and needed STD testing and/or treatment or affordable contraceptive methods.  The BATPP collaborated with the Will County Community Health Center to bring a Teen Clinic to their Bolingbrook site. Members of the BATPP wrote letters of support for this initiative. This Teen Clinic is located at 323 Quadrangle Drive, Suite 335. They offer affordable STD testing and treatment and contraceptives, and cost is based on a teen’s income, and therefore it may be low cost or free. In addition, the VNA Health Care in Bolingbrook, located at 396 Remington Boulevard, also began offering these services to teens, allowing teens to now have two locations to go for these services.

VVSD Community Outreach Specialist Kathy Batistich says the progress made thus far is the result of everyone from the school district to the WCHD being so committed.  “We have been so pleased with the Will County Health Department’s role and how they bring in the statistics, the data, and the knowledge.  It gets us all looking at this in the same way: the improvement of the community’s overall health.”

If you are interested in being a part of the BATPP, and helping us have a positive impact on Bolingbrook teens, please contact the Teen Pregnancy Prevention Program at 815-727-5991 or kharkins@willcountyhealth.org.  Their next meeting is Thursday, March 14th from 3:30pm-5:00pm at the Bolingbrook Fountaindale Public Library, Meeting Room A.