Teen Pregnancy Prevention Program Concludes in Bolingbrook with Many Successes 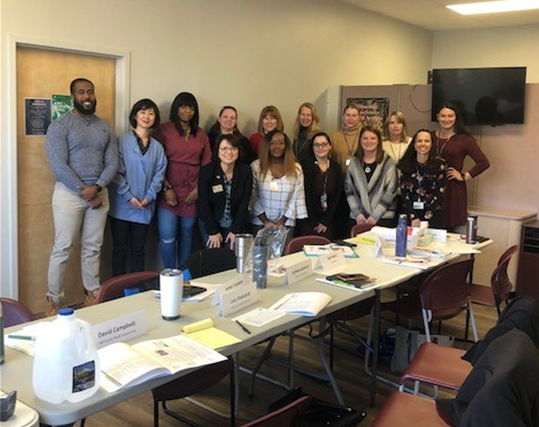 From 2015 to 2020, the Will County Health Department (WCHD) coordinated the Teen Pregnancy Prevention Grant (TPP) within Valley View School District’s Bolingbrook middle and high schools. As the grant concludes this year, we reflect on the program’s many successes.

In December of 2015, the Illinois Department of Human Services (IDHS) awarded WCHD- in partnership with the Valley View School District – the Teen Pregnancy Prevention Grant. The purpose of this grant was to have a significant impact on reducing teen birth rates, sexually transmitted diseases (STDs), and existing health disparities to put teens on the path to a successful future. While teen pregnancy effects all racial and ethnic groups, it’s recognized by IDHS that African-American and Hispanic teens often share a disproportionate burden. In 2014, statistics revealed there were 64 teen births in the Village of Bolingbrook, and African American and Hispanic teens accounted for many of them- 25 births by African American teens and 26 births by Hispanic teens. “Bringing highly skilled, dynamic, Community Health Educators into our classrooms provided knowledge, expertise, and community resources that directly supported students, staff, and our VVSD families,” says Kathleen Batistich, Community Outreach Coordinator for Valley View School District. “We are so grateful to have developed this strong relationship with the WCHD over the past 5 years and look forward to future opportunities to collaborate in support of community health and wellness.”

However, teaching the curricula was only one component of the grant. Simultaneously, efforts were needed to both educate parents and community members about methods to combat teen pregnancy and STDs, and reduce those rates through education and positive youth development. Recognizing the impact a community-driven approach would have, WCHD mobilized the Bolingbrook community through the Bolingbrook Alliance for Teen Pregnancy Prevention (BATPP) to help achieve these measures. BATPP members comprises providers from youth-serving organizations, community stakeholders, Valley View School District staff, WCHD staff, parents, and community members collaborating to improve parental involvement, parent/teen communication, and teen awareness and access to local reproductive services.

Through the BATPP, WCHD was introduced to Selina Jones and her young women’s leadership group, S.T.A.R.S. at Bolingbrook High School. Initially, WCHD partnered with the S.T.A.R.S. group to implement the TPP curriculum, but that partnership evolved into the S.T.A.R.S. girls acting as the program’s youth leadership council. The S.T.A.R.S. girls provided an important and critical youth voice towards the BATPP’s initiatives to reduce teen pregnancies in Bolingbrook- such as feedback on changes made at the Will County Community Health Center to make the clinic more teen-friendly and messages used for local teen-targeted campaigns.

WCHD Community Health Educator Kathleen Harkins says the BATPP’s efforts in the community complimented the lessons students learned in the classroom.  “A supportive and positive community is an important protective factor against teen pregnancy.  When teens know that the community cares about them and their futures, this can encourage teens to make better choices.”

Members of the BATPP championed many grant successes in the community- curriculum nights to educate parents, Illinois Minor Consent and Confidentiality Laws trainings for Valley View School District faculty and students, Bolingbrook television appearances to discuss curricula, and local campaigns to promote health-positive messages and resources to teens. Though, the most considerable- and crucial- success was the opening of a ‘Teen Clinic’ at the Will County Community Health Center (WCCHC). Despite the high teen birth and STD rates in the community, there were limited options for local, teen-friendly family planning clinics. As the WCCHC requested to expand their existing Title X and Family Planning Grant services to include a Bolingbrook location, the BATPP provided letters of support, meeting minutes, and community specific data to substantiate their request. The Bolingbrook ‘Teen Clinic’ opened the Summer of 2017, and has since offered local, confidential family planning services- such as STD/HIV testing and treatment, birth control, emergency contraceptives, and condoms- to teens for little or no cost. Additionally, VNA Health Care in Bolingbrook- located at 396 Remington Boulevard- also began offering these services to teens, increasing teens access to local low-cost quality care.

From 2014 to 2017, the Village of Bolingbrook saw a 45% decrease in teen births, going from 64 births in 2014 to 35 in 2017, and the Teen Pregnancy Prevention Program’s multifaceted approach may have contributed to this good news. Comparatively, the State saw a 33.3% decrease in teen births within the same time frame. Births among African American and Hispanic teens were reduced as well- from 25 to 13 teen births among African American teens and 26 to 19 births among Hispanic teens. Throughout the United States, rates of chlamydia and gonorrhea increased rapidly, especially in 2016, and Bolingbrook unfortunately experienced this increase as well.  However, Bolingbrook’s rates, as compared to the states, climbed at a much slower pace.

For more information on the Will County Health Department’s Teen Pregnancy Prevention Program, or to access resources and education materials, please visit: http://willcountyhealth.org/teen-pregnancy-prevention-program/.

To learn more about the collaboration with the S.T.A.R.S. at Bolingbrook High School, please see: http://willcountyhealth.org/health-department-partnership-helping-to-prevent-teen-pregnancy-in-bolingbrook/