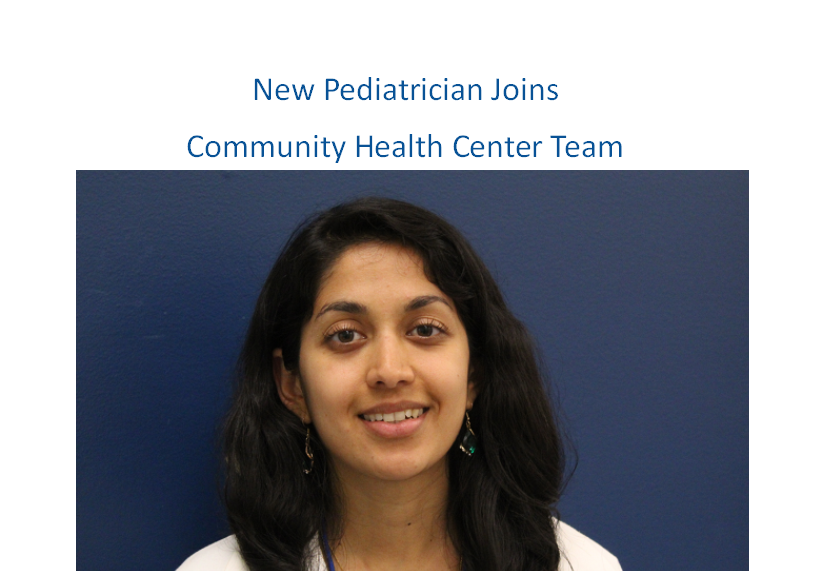 The staff at the Will County Health Department (WCHD) and Community Health Center (CHC) would like to welcome Dr. Anusha Khapekar as the CHC’s new pediatrician.  And as it turns out, her journey to becoming a pediatrician had its major moments during her undergrad years.

As a child, Dr. Khapekar recalls not being excited about her mother’s job as a doctor.  “I was not thrilled about all the studying and long hours involved, not to mention dealing with blood and human fluids.  I just didn’t want to do it.”

But after she entered Loyola University as a Psychology major things began to change for the Westmont native and Hinsdale Central High School graduate.  “I joined the American Red Cross Club on campus and we were volunteering at area hospitals.  I also joined GlobeMed, which works to sustain access to health care around the world by partnering with health centers in different countries.”

Around that same time period, something happened at home.  Dr. Khapekar’s brother, 11 years her junior, had an accident where he ran into a table and sustained a head injury.  “I was home alone with him and had to go into ‘mom mode,’” she recalls.  “I took him to his pediatrician and was very impressed with how they made him calm, and how they handled his stitches.”

Soon, she had decided that being a doctor appealed to her after all.  “I finally realized, ‘hey, I kind of like this.’  My mother had never pushed me, but I’m sure she was happy.”  And pediatrics was what appealed to her the most.  “I really liked seeing the relationships pediatricians have with their patients, and the idea of caring for children and preventing problems.” During her time in medical school at Midwestern University in Downers Grove, her instinct was confirmed.  “After doing ‘surgery rotation,’ I would feel very tired and burned out.  But after ‘pediatrics rotation,’ I would feel very positive about everything.  I knew that’s where I wanted to go.”
During her medical school years Dr. Khapekar spent some time at a Federally Qualified Health Center (FQHC) in the Pilsen neighborhood on Chicago’s southwest side.  And after her residency at Advocate Lutheran General Hospital in Park Ridge, she wanted to return to the FQHC world.

“It just feels right,” Dr. Khapekar explained.  “I didn’t want to turn people away based on their ability to pay.  Everyone should have access to the quality care they deserve, and that’s why I like being at an FQHC.”

An appointment can be made with Dr. Khapekar by calling the Will County Community Health Center at 815-727-8670.  More information on Will County Health Department programs and services is available at  willcountyhealth.org.