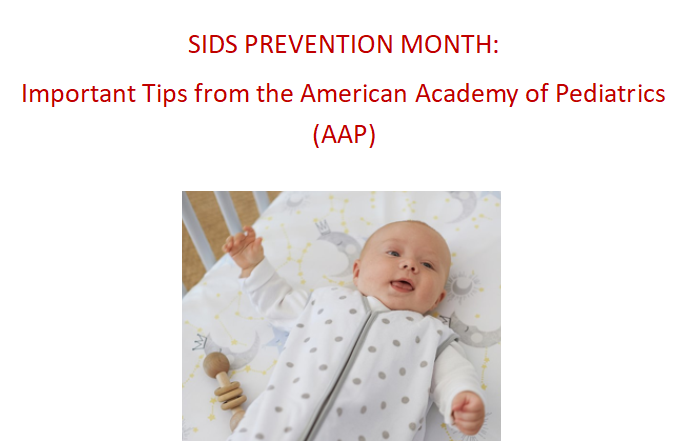 During October’s “Sudden Infant Death Syndrome (SIDS) Awareness Month,” Will County Health Department (WCHD) Better Birth Outcomes Program Coordinator Sylvia Muniz wants to remind everyone that although there has been much improvement against SIDS tragedies compared to decades ago, we can still do much better.  And the key is to simply “listen to the recommendations of the American Academy of Pediatrics (AAP).”

“Improvements were made when the “Back to Sleep” movement was in full force in the late 90s and early 2000s.  But people just are not following other important recommendations that the AAP has made since then.”

Muniz says the AAP now recommends, in addition to having the baby sleep on his or her back, having the baby always sleep in their own bed (be it a crib or bassinet) and NOT in the parents’ bed, but in the same room with the parents.

Muniz says these recommendations are especially important for the first six months, and/or until the baby can roll over on his or her own and hence get to a place where they are breathing comfortably.  The recommendation concerning having the baby in the same room is part of another very important factor to help avoid SIDS: making sure the baby is not too warm.

“If you are comfortable, then the baby is comfortable,” Muniz explained.  “So having the baby in your room, with the temperature you prefer, assures that.  Then, you should not be covering the baby with loads of blankets because you are afraid they will be too cold.  What is recommended for the baby, in lieu of blankets, is a sleep sack.”  The sleep sack is a one-piece sleeper that covers the entire baby from legs to chin, and removes the worry of a baby becoming tangled in or suffocated by loose blankets; as well as the possibility that a baby becomes too warm.

Muniz says one factor that can get in the way of “not overheating the baby” and “using only a sleep sack” can be pressure from older family members.  “They might say, ‘you slept that way, your brother and sister slept that way, and you’re fine.  So why would you do it differently?’” Muniz explained. A zipper sleep sack, which covers the entire baby from the legs to the chin, is recommended by the AAP as the best sleepwear to help prevent SIDS.

Another popular item from the past no longer recommended is crib bumper pads.  Muniz says those were used in the past for decorative purposes or to cover up a certain fear.  “Parents might think ‘what if they bump into the sides of the crib?’  Well, during the early months they are not even rolling over.  Then later, the crib bars are always close enough to keep a baby’s head from poking through.  It’s really simple: there should be nothing in the crib except a baby in a sleep sack.  Nothing to elevate the baby’s head, and no ‘wedge pillows’ for the baby’s head like those often used in the past.”

In addition to sticking to the recommendations of the AAP when it comes to how their baby sleeps, there are other things that can be done to help reduce the risk of SIDS.  Muniz says two of the most important are to breastfeed the baby for as long as both mother and baby are comfortable with it, and to not smoke both during pregnancy and after the baby is born.

For more on preventing SIDS, go to https://www.healthychildren.org/English/ages-stages/baby/sleep/Pages/A-Parents-Guide-to-Safe-Sleep.aspx.

For more on the Will County Health Department’s Better Birth Outcomes Program go to http://willcountyhealth.org/better-birth-outcomes/.