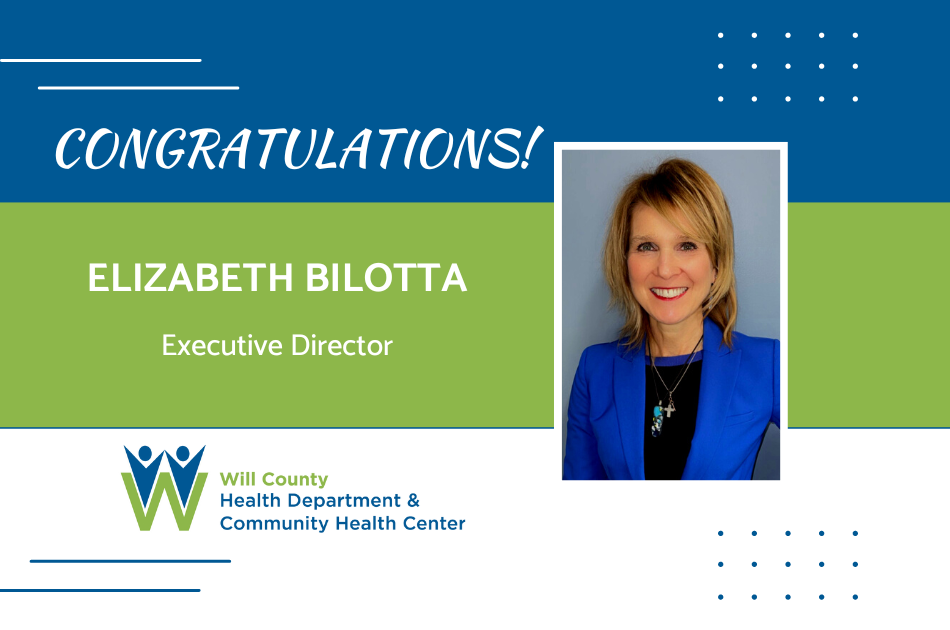 The Will County Board of Health has appointed Elizabeth Bilotta as Will County Health Department’s next Executive Director, effective February 4, 2023.

Bilotta takes over the executive director role following the retirement of Susan Olenek after 33 years of service.

“After 33 years of public service to this community, leaving is bittersweet,” said Olenek. “But I leave knowing this agency and the community will be in very capable, dedicated hands.”

Like Olenek, Bilotta has an extensive history with the Will County Health Department (WCHD), serving the agency for almost 27 years. She spent the past three years as the Assistant Executive Director. In that role, she’s developed the agency’s annual budget and oversees the management of the all supportive administrative departments. She previously served as the agency’s Director of Administrative Services (2016-2019), Director of Environmental Health (2008-2016) and Program Coordinator in Environmental Health (1999-2008).

“I’m very excited for the opportunity to lead such a wonderful organization,” said Bilotta. “In my time at the department, I have been fortunate to work under some tremendous mentors who held the title of executive director, including Sue, John [Cicero] and Jim [Zelko]. They have helped shape the Will County Health Department and have left behind a lasting legacy. I am incredibly honored to be following in their footsteps.”

Bilotta earned her bachelor’s degree from Illinois State University in 1989 and joined the WCHD as a Sanitarian working in Environmental Health. She held that role until 1992. From 1992-1999 she worked in the private sector at BCM Engineers/Smith Technologies, Waste Management Inc. and the IT Corporation before rejoining the WCHD in 1999. She completed a Master of Science in Environmental Biology from Governor’s State University in 1992.

“A lot has changed since I joined the agency in 1989,” said Bilotta. “One thing that has remained the same is the dedication of our great staff. They are passionate about the work we do and show compassion and empathy to our clients. We have many new opportunities for our staff to meet the needs of our community. Over the past few years, we’ve enhanced our relationships with our community partners and I look forward to being able to continue to further develop those relationships and create more opportunities for our agency to serve the people of Will County.”

Bilotta has been active throughout Will County outside of the WCHD. She’s served as an election judge, has served on the Joliet Diocese Pastoral Council, is a current member of the Will County Local Emergency Planning Committee and was the former Vice President of the Will County School District 92 Board.