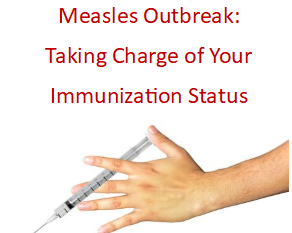 The measles situation in the United States has seen attention focused on the mid west region this week after the confirmation of a measles case in Chicago.

Health officials have confirmed that a subject arrived in Chicago at O’Hare International Airport on May 15th.  He later developed fever, general symptoms, and a rash.  He was seen in urgent care, and hospital officials promptly called CDPH about their suspicion. Diagnosis was later confirmed.  This person had recently been traveling, in the Philippines, Singapore, Hong Kong, Shanghai, and then on to Chicago on May 15th.  He is originally from Brazil.

From January 1 to May 17, 2019, 880 individual cases of measles have been confirmed in 24 states (https://www.cdc.gov/measles/cases-outbreaks.html), with many states experiencing outbreaks. In Illinois, there have been eight cases with the most recent case in an adult traveler to Chicago confirmed on May 17, 2019. Individuals identified as potentially exposed during the contagious period will be directly contacted by public health. However, exposures can also have occurred in public areas, where it is impossible to identify all potential contacts.

Will County Health Department (WCHD) Epidemiologist Alpesh Patel says the number one priority for all families is to “make sure everyone is up to date with their immunizations. And if they are not up to date on their MMR (Measles, Mumps, Rubella) vaccine, they should contact their medical provider immediately.”

Patel says the usual routine is two doses of MMR vaccine as a child: one around the age of 12 months and the other around the child’s fourth birthday. “After the first dosage you are about 90% protected against measles, and after the second dosage 97% protected,” Patel explained. “Teens and adults with no evidence of immunity against measles should receive two doses of the MMR vaccine, separated by 28 days.”

Patel says any teen or adult who does not know their immunization status against measles, meaning not knowing their shots history and/or whether they had the measles as a child, needs to consult their medical provider for lab evidence of immunity.

It is also important to note, Patel says, that if there are circumstances where you would like your child to have one of their MMR doses early, such as if you are about to travel internationally, your medical provider can decide if it’s a safe option. “Also,” Patel added, “if the child was exposed to someone who has the measles, such as a sibling, but they do not have any symptoms yet, they could perhaps receive the first dosage before 12 months or the second one before four years. It depends on their overall health, or if they have other illnesses that might compromise their immunity.”

Measles is an airborne virus in the nose and throat mucus of the infected party that is spread by sneezing and coughing. The virus can live in the air and on surfaces two hours after an infected person has left the room. Patel also points out that what we are being reminded of during this current nationwide outbreak is that the more protected a region is against the measles, the less chance there is of this highly contagious virus spreading. And the less protected, the greater chance.

“Over 200 of these cases are in Rockland County, New York along the Hudson River,” said Patel. “Statistics show that 80% of their cases are people who never had any MMR doses. Most disturbing is that 68 of these cases are children under the age of one. This is when the body is most vulnerable, because you do not have a fully developed immune system to fight the virus. And even if the child survives, there could be permanent health issues for the rest of his or her life.”

WCHD Communicable Disease Investigator Terra Ihde points out that being immune to the measles because you have had it is absolutely no match for being protected from getting it in the first place. “At one point, it was believed that measles was eradicated in this country because of herd immunity status (where enough of the population is protected by vaccination to essentially stop the spread of an illness). But due to pockets of unimmunized residents, we now have this increased risk of outbreaks.”

Patel says the key to preventing future outbreaks like this, in addition to families taking control of their immunization statuses, just might be new state laws. “At the federal level, the CDC provides info and makes recommendations, but it’s the states that can pass stronger laws. For example, some states still allow religious exemptions in public schools where a child can attend classes without the MMR vaccination. But in New York and Washington State (another major area in the current measles outbreak), they are talking about laws that would only allow exemptions for medical reasons, such as if a child cannot handle an MMR dosage due to another illness. It often happens that when one state passes a law with significant changes like that, others will look closely and follow suit.”

For children in Will County, for example, the Regional Office of Education reports that out of 187 total schools, with an enrollment of 109,000, there are currently 1,308 “religious objections” on file, which amounts to about 1.2% of Will County children in school.

But for now, while the U.S. awaits to see which states will pass more restrictive laws concerning the avoidance of MMR vaccine, Patel says once again that the key right now is for all families to know their immunization statuses, and if they are not up to date on MMR shots, get to a medical provider immediately.

“Sometimes, unfortunately, with outbreaks like this, we are just seeing the tip of the iceberg concerning what might happen next. That’s why it’s important for everyone to take this seriously.”

You can make an appointment with the Will County Health Department Immunizations Clinic by calling 815-740-8143 or 877-942-5807. The appointment desk is available Monday, Tuesday, and Thursday 8 AM to 4 PM, Wednesday 10 AM to 6 PM, and Friday 8 AM to 11:30 AM. Please bring immunization records and insurance information to your appointment. Children under 18 need to be accompanied by an adult.

Patients of the Will County Community Health Center, which opens at 7:30 AM, can make appointments at 815-727-8676. Vaccine is available for children and adults, and walk-ins are accepted. The CHC recommends that if someone believes they have the measles, please go to the emergency room, or call the CHC before arriving.

For more information or directions, please go to willcountyhealth.org.