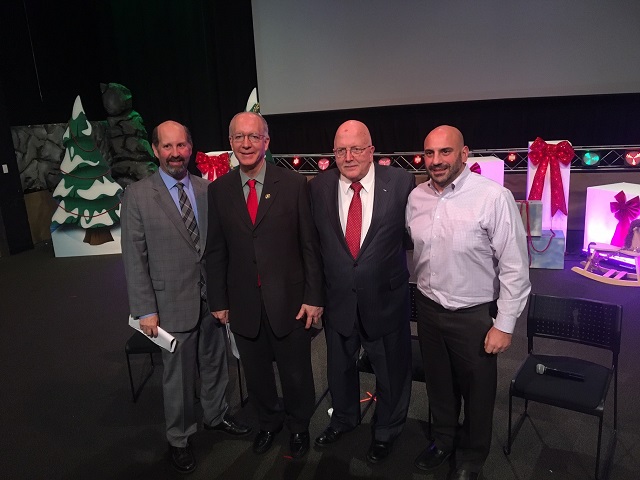 On Monday  evening December 3 rd a community forum on “Mental Health & Social Media” was held by Congressman Bill Foster, who represents the Illinois 11th District.  The event which was held at the Community Christian Church in Naperville, and was opened to the community at large.  In addition to the Congressman, the panel included Jeffrey A. Rabin (Attorney at Law) who is the President of the Board for the National Alliance for the Mentally Ill (NAMI) of DuPage County; Adam Russo, LCSW the Chairman & CEO of Edgewood ClinicalServices; and Dr. Joe Troiani the Director of Behavioral Health for the WillCounty Health Department.

The panel opened with Congressman Foster, who briefly spoke on the importance of breaking stigmas on mental illness, and the need to have a rational dialogue on quality care for individuals who struggle with mental illnesses.  Dr. Joe Troiani addressed the importance of providing government support and funding for community mental health programs to assist those experiencing mental illnesses. He also touched on the serious effects that social media can have on the human brain, and the mental health of children and adolescents.  Adam Russo discussed his work with Edgewood Clinical Services, and his experience in dealing with those affected by  mental health struggles. He also explained how social media could impact a person’s mental health.

Mr. Rabin described the work of the National Alliance for the Mentally Ill (NAMI),and how vital it is to support mental health awareness to combating stigmas. Along with the other panelists, he touched on the effects clients have had in relation to social media use and mental health.

Congressman Foster and Dr. Troiani reported on the just released of how the  United States Life Expectancy has for the past two years been decreasing due to the increase in suicides and drug overdose deaths. The report also states that the United States is in the longest period of a declining life expectancy since the late 1910’s.  According to the Center for Disease Control manager who oversees CDC death statistics, “we’ve never seen anything like this”. The suicide rate in the United States is at the highest that it has been in 50 years per federal governmental records. Last year there were 47,000 suicides which is an increase of 2,000 fromthe previous year.

The drug overdose deaths continue to climb, surpassing 70,000 deaths from the previous year. This is the result of the United States being in the middle of the deadliest drug overdose epidemic in our history.  Deaths from guns also rose for a third year in a row to 40,000. It is important to note here that most gun deaths were suicides.

In a recent statement, the Director of the Centers for Disease Control (CDC) stated, “These sobering statistics are a wake-up call that we are losing too many Americans, too early and too often, to conditions that are preventable”.

Dr. Troiani, in addressing the problems associated with excessive social media use, reported that scientific research has determined that extensive engagement with social media platforms (three hours or more) by children and young adults can have the following psychological and physical (specifically the brain) consequences as determined by recent psychologicalresearch: