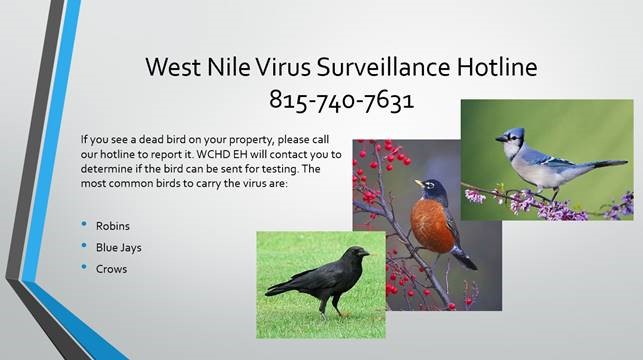 Although it has been a slow year thus far for West Nile Virus activity among mosquitoes, the Will County Health Department advises residents that caution still must be upheld during these summer months.  The Illinois Department of Public Health is reporting at 11 counties in Illinois have now reported positive-WNV mosquito samples. West Nile virus can be passed to a human being when he or she is bitten by a culex mosquito, after the misquito has bitten a bird infected with WNV.  For this reason, the Will County Health Department also operates a West Nile Virus Surveillance Hotline.  If you spot a dead bird on your property, you are asked to call the Health Department’s Surveillance Hotline at 1-815-740-7631 to report it.  You will be contacted to determine if the bird can be picked up for testing.  The most common birds that carry WNV are robins, blue jays, and crows.